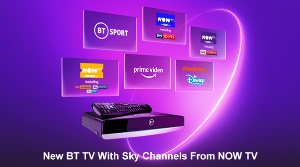 There’s still time for new customers to grab the best BT Broadband deals in February 2023 at BT.com/deals, with prices reduced to £29.99 a month for BT Fibre 2 Broadband. There’s also a BT Reward Card to spend up to the value of £100.

Join by 23.59pm on the 9th of February 2023 to get £300’s worth of kit with the BT Fibre and TV package, which includes a FREE BT 4K set top box and super-fast fibre optic broadband speeds averaging 67Mbps.

END_OF_DOCUMENT_TOKEN_TO_BE_REPLACED New customers switching to BT can claim a FREE BT Reward Card up to the value of £100 when they order a BT Fibre package online at the bt.com/rewardcards website by the 9th of February 2023.

The BT Reward Cards are supplied by BT with the money pre-loaded on to the card and can be used either online or anywhere across the world where there’s a MasterCard logo.

END_OF_DOCUMENT_TOKEN_TO_BE_REPLACED

BT has launched 3 exclusive broadband deals at bt.com/12months which are available on shorter 12 month contract periods and include a £5p/m landline phone service (though this can be removed if required). The deals also include a personal speed guarantee, more online security features than other big providers, plus BT’s award-winning smart Hub.

END_OF_DOCUMENT_TOKEN_TO_BE_REPLACED

Unlimited BT Infinity 2 (BT Fibre 2), BT’s superfast fibre optic broadband service, is now available for a price of just £16.99 a month. There’s also a FREE BT Virtual Reward card up to the value of £110 included for orders placed online at the bt.com/infinitydeals website by the 8th of December 2022.

The BT Infinity deals also include 1,000GB’s of FREE BT Cloud storage, while BT’s mobile offering, including its best value 4G SIM only plan, can be added for an extra £8 per month.

END_OF_DOCUMENT_TOKEN_TO_BE_REPLACED The TalkTalk Black Friday Deals 2022 have arrived with superfast TalkTalk fibre broadband packages now available from just £25 a month at the talktalk.co.uk/blackfriday website (deals end on the 9th of December).

Other Black Friday highlights include no broadband setup fees saving up to £50, plus TalkTalk Fibre Broadband, TV and phone packages from just £30 a month.

END_OF_DOCUMENT_TOKEN_TO_BE_REPLACED The Plusnet Black Friday Deals 2022 are now live until the 7th of December, with Plusnet Fibre Broadband available from just £21.99 a month for 18 months at the plus.net/blackfriday website. There’s also no activation fee to pay, saving a further £10.

There’s also a range of Plusnet Mobile Black Friday deals available with prices from £8 a month for 5GB’s of data, plus unlimited call minutes & texts.